Need something to watch this weekend? I have an idea. Have you seen "Invictus" with Morgan Freeman and Matt Damon? If not, see it. And don't worry, this blog will not spoil it for you. And if so, what did you think? After a slow start, I thoroughly enjoyed this movie. Multiple themes were inspirational- a nation coming together, the underdog's fight, seeing leadership in action. Here are my 5 thoughts: 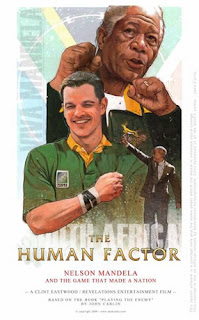 Invictus
Out of the night that covers me,
Black as the Pit from pole to pole,
I thank whatever gods may be
For my unconquerable soul.
In the fell clutch of circumstance
I have not winced nor cried aloud.
Under the bludgeonings of chance
My head is bloody, but unbowed.
Beyond this place of wrath and tears
Looms but the Horror of the shade,
And yet the menace of the years
Finds, and shall find, me unafraid.
It matters not how strait the gate,
How charged with punishments the scroll.
I am the master of my fate:
I am the captain of my soul.
How can you NOT be inspired by this? Be unconquerable, be proud, be courageous, be yourself...